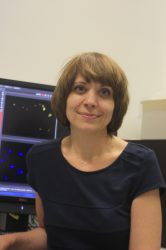 University of Hamburg (Germany), Institute of Biochemistry and Biology

Short proteins (small proteins) are often missed by algorithms for de novo search of new open-reading frames because of the short size, often <150 bp or <50 codons. In this project, we seek to address the current void in algorithms/tools for systematic identification of short ORFs (sORFs) in bacteria which genuinely encode small proteins. We use the power of two deep-sequencing technologies, RNA-Seq and ribosome profiling, to extract on transcriptome-wide scale expression features of sORFs and use them in designing the algorithm for de novo search of expressed sORFs. These features include translational start and termination of protein synthesis and most importantly the three-nucleotide periodicity in ribosome-protected fragments when truly translating an ORF. To faithfully determine all initiation sites (including non-canonical starts) we will sequence the transcriptome upon inhibition of translation initiation with newly identified peptide antibiotic. Since bacteria in general employ similar expression rules, it is our vision to train the algorithm with data sets produced in E. coli MG1655 grown at various conditions, but to develop it to work across all bacterial species. Leveraging expression features from RNA-Seq and ribosome profiling, which allow predicting only truly expressed sORFs, is a step forward in detecting sORFs as compared to the algorithms using solely genetic information.