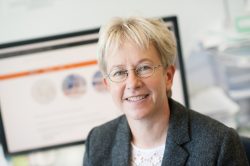 Small proteins in Haloferax volcanii: an important part of the proteome

Recent data clearly show that proteins smaller than 50 amino acids are synthesised in the cell and fulfil important cellular functions in bacteria and eukaryotes. Very little is known about these proteins in archaea. Therefore we will pursue two major goals in the proposed project: (1) the identification of the complete small-proteome of the halophilic archaeon Haloferax volcanii as well as (2) the detailed analysis of selected already identified small proteins. In the preliminary work we already initiated the identification of the small-proteome. Proteins from cells grown under standard and two stress conditions were isolated and identified using mass spectrometry. Altogether 34 small proteins could be identified with this approach and to begin with we selected four small proteins for in depth investigations. For three of the small protein gene deletion strains could be generated, for the fourth gene -which we could not delete- we initiated gene repression using CRISPRi. Initial investigation showed for all four strains interesting phenotypes, confirming that they are worth pursuing in the proposed project. Taken together preliminary data clearly show that there are small proteins present in Haloferax and initial results of the investigation of four selected small proteins suggest that they have important cellular functions. In the proposed project we will complete the identification of the complete Haloferax small-proteome by using a protocol optimised for the investigation of small proteins in the frame of the Z1 project. As an additional approach to identify small proteins we want to employ ribosome profiling in the frame of the Z2 project. To further optimise the small protein identification we will use bioinformatics to re-annotate the Haloferax genome (in the frame of the Z2 project), generating a complete six-frame translation. Analysis of the four small protein genes for which we started the investigation in the preliminary work will be continued to unravel their functions. The respective deletion and CRISPRi strains will be examined thoroughly for phenotypes. We will monitor the effect of overexpression of the four small proteins on the cell. We will co-purify and identify interaction partners of these proteins by using FLAG-fusion proteins. We will determine the cellular localisation of the small proteins and elucidate their structure using NMR. Further interesting candidates to be studied are small proteins encoded by small regulatory RNAs. We detected two sRNAs that could act as mRNAs for small proteins. We successfully generated deletion strains for both sRNA genes that can now be analysed in detail in the proposed project.