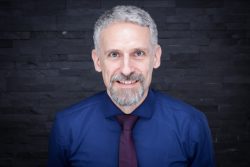 The role of small single transmembrane helix proteins in cyanobacteria

Cyanobacteria are the only prokaryotes performing oxygenic photosynthesis. Multisubunit membrane protein complexes play an essential role in this process and all of them – as far as being analyzed – contain up to 10 small (<50 AA) µ-proteins with at least one single transmembrane helix (µTMH proteins). Small size paired with often extreme hydrophobicity severely hamper their discovery but we have developed a well-suited analysis pipeline by combining chromatographic purification of affinity tagged complexes with subsequent in-depth mass spectrometry analysis. This approach in combination with sequence analysis revealed novel µTMH candidates that will be targeted by reverse genetics and biochemical characterization. Moreover, previously uncharacterized cyanobacterial membrane protein complexes (e.g. Cytochrome-bd oxidase) will be isolated and analyzed for the presence of µTMH proteins. The final goal is a comprehensive view on the role of µTMH proteins in cyanobacteria.